How Far Away Is Intelligent Life In the Universe?

Scientists announced the discovery this week of Kepler-22b, the most Earth-like planet ever detected.

Kepler-22b is similar in size to the Earth (astronomically speaking at least) and it orbits a sun-like star from what is considered to be a habitable distance, an indication that temperatures are likely neither boiling hot nor tundra cold on the planet's surface.

To sustain life in the way that we have done on earth, a planet must be in the "habitable zone," with a climate that allows for the existence of liquid water on the planet's surface. Kepler-22b meets the habitable distance criteria, and if it were found to have a surface and atmosphere similar to ours, scientists estimate temperatures in the comfortable 70 degree range.

This is all very exciting for scientists and for the fervent "I want to believe" community. I don't belong to either of those groups (although I am more likely to join SETI to listen for aliens than I am to become a scientist at this point in my life), but the discovery of Kepler-22b peaked my imagination and I decided to have a little fun with it.

If we take the little science we know about Kepler-22b a couple of steps further, it's fair to say that the planet could meet all of our habitable criteria. Then, let's assume that biological evolution in Kepler-22b's primordial soup has occurred on a parallel track to the way science theorizes that it happened on Earth. Depending on where Kepler falls on the evolutionary timeline, there could already be humanesque life on the planet, albeit possibly only Cro-Magnon types, or perhaps advanced far beyond us.

Working from the assumption that intelligent life might well have evolved on Kepler-22b (or whatever the Keplerians call their planet), and being a naturally gregarious and sociable type, my next logical question was - how long would it take us to get there to say hello?

Kepler-22b is an estimated 600 light years away. That means if we could travel as fast as a beam of light, it would take about 600 years. So, I researched our current fastest spacecraft to see how close we were getting to that kind of speed. What I found was a bit discouraging.


The New Horizons robotic spacecraft holds the record for the fastest speed in exiting the Earth's atmosphere at about 36,000 mph. This is damned impressive (see the video below if you don't believe me), but it's pretty slow out of the starting gate compared to the speed of light.


I believed there had to be a quicker way to travel through space once you get up there, and it turns out I was correct. Helios 1 and 2, a pair of probes that were launched in the 1970s to orbit the sun, hold the record for actual interstellar speed of a spacecraft with a maximum velocity estimated at 157,000 mph. Now, we're getting somewhere. Or so I thought.

I've taken a few liberties with various branches of science (not to mention reality) to get us this far, so stay with me.

Let's just pretend that we have a vehicle that can transport us to Kepler-22b at the speed of light. Now, it will only take us six hundred years to get there. Of course, none of us are persons from the Old Testament who live to be 900 years old, so even if we started the trip in our fancy new "light mobile," it would be our progeny, not us, who would actually finish the journey and reach Kepler-22b. 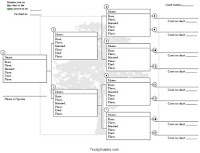 I did the math, and for someone my age who spawned a lineage of children who each had their own child at age thirty, it would be the great-grandchild's great-grandchild's great grand-child (six times over in total) who would actually reach Kepler-22b and find out if intelligent life existed there. That would happen around the year 2555, and the lucky offspring who made it would be sixty years-old.

Of course, none of this is likely (or scientifically valid in any way), but in a vast and infinite universe of possibilities, it could happen, right? At any rate, I now have the answer to the title question of this post ("how far away is intelligent life in the universe") - even under the most ideal circumstances, and in a world where everything I've assumed in this article is true, intelligent life is really, really, really far away.
Posted by Jeff McKown at 1:50 PM

Jeff's debut novel, Solid Ground, is available in select bookstores and at most online book retailers.